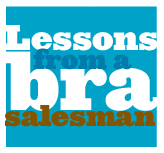 All I could think about was running.

Looking across the desk at my boss, Jamie, I listened as he asked the question I’d been fearing for more two months.

“WHY DO YOU WANT TO SELL WOMEN’S UNDERWEAR?”

He glared at me, and I shifted my weight, trying to figure out what to say.

I hadn’t expected this to happen when I walked into his office that morning. As a fitness assistant at my university’s student life center, I’d been on my way to drop off some gym visitation statistics in his mailbox. He usually didn’t come in that early, and if he did, it was almost impossible for him to know anything about my applying for a job at Victoria’s Secret. How could he? I had barely told anyone about it. Just my roommate, Josh, and the hiring manager at the store, Janice—neither of whom had direct contact with people who could disown me.

Unless, I thought, Janice had called my references.

Like any good company, Victoria’s Secret had warned me they would do this, multiple times; and like any good idiot, I’d proceeded to ignore them. First, they mentioned it on the application, specifically asking for references from two supervisors and one peer. They then made it painstakingly clear that they would not only contact these people, but possibly a slew of others–including “family members, business associates, financial sources, friends, neighbors, and others with whom I am associated”–in order to get a clear picture of my character. (Unless I lived in the states of Maryland or Connecticut, they could have also required me to take a polygraph test.)

And still, I sat at the dining room table of my townhouse, reading it over and thinking, Nah, they won’t actually call those people.

Even during the job interview, as I listened to the hiring manager say something along the lines of, “So, next step, we’re going to call those people,” I only nodded my head, thinking, Oh come on. This is retail. You don’t get paid enough to do that.

Yet looking at Jamie, who was slowly growing more red in the face by the second, I began wondering if perhaps they do get paid enough to do that. Especially when the applicant is a grown-ish man with the tendency to wear too much cologne.

“WHY DO YOU WANT TO SELL WOMEN’S UNDERWEAR?”

The question played again in my head, and I stared at him, still trying to figure out how to respond. I knew I was going to have to answer this question at some point, but I hadn’t imagined it would come this quickly–or from someone other than my parents. In fact, I’d just resigned to hoping that it would never happen, that I could just coast peacefully along in the world of bras without anyone noticing. On the surface, I’d be the same 23-year-old Chris that everyone knew as the preppy, pre-dental student in his fifth year of undergrad. But in the shadows, in a world that I only knew, I’d be working towards something that felt a lot more like myself. Even if it was as a cashier at Victoria’s Secret.